Another race under the belt, another ultra. 100km’s. Run in Luna sandals. Initially thought I could do it barefoot. A quick recce of the course the night before assured me this would not be possible. Thank goodness for that recce. The stretch from Aid 2 to Aid 3 of 3km each way, was very rough. Black tar/asphalt and very hot! I would have shredded my feet or burnt them.

Running in my Luna sandals was excellent. My feet held up well, no issues. I had a brief session where I got a small sweat graze on top of my foot, attempted to put a plaster on which fell off after about 2 mins, so rubbed spit on instead, and forgot about it. At the end of the run my feet felt a little bruised and rather hot, but I think every runner had that issue, no matter how their feet were shod.

The course was run in Australind and commenced at 3am with a 50km & 100km option. The 25km option started at 9am to allow park runners to participate. Race Director Ron McGlinn. The route was interesting. A 6.25km stretch along the Australind foreshore. 6.25km out and back, making a 12.5km lap. Very flat. I am reliably informed we had 15 speed humps that accounted for the total elevation in a 3km section. Trouble was these speed humps did not quite line up with the shade, so later on one was forced to choose between two options, that is run one speed hump, walk one, run one walk one- OR run the sun, walk the shade. Dependent on the time of day and level of fatigue both “games” were played and the better option won!.

Having done some previous long distances that were repetitive laps, I did not think the 8 laps (16 passes) of the 100km course would phase me. The concept did not. What did was that wicked 2km leading into Aid 3. The first 3 or 4 passes were barely noted until the sun came out. Knowing each and every time you were about to enter the “Hell Run” took a lot of guts to keep stepping forward. This stretch was long, surface very hot, no shade, full sun, with all the speed humps and for some reason always the loneliest part of the course. Every time I went through this section I reminded myself that it was hotter when I ran Comrades last year, and that each tiny speed hump represented one of the major hills of Comrades, so a walk in the park. Not. Brain refused to be tricked.

I went into the event feeling fit if a little apprehensive. No matter how you tell it, 100kms is a long way. There is a plus and a minus side to repeat laps and an aid station every 3km’s. When things get hard it seems to take longer and longer to pass through these aid stations. According to Strava I spent nearly an hour in the aid stations. Every 12.5kms one was back at the start point, so easy to just stop. If the course was continuous, one feels obliged to keep going because no matter what you have to keep moving to get to the finish- but passing the finish 8 times!? Will power.
The great plus of the repeat laps was being able to keep track of every one. I had two main goals (I always have plan a, plan b and plan c as it keeps the morale up). My primary goal was to try and bag a third place. My second was to get a good time. I knew the front runner girls were well seasoned ultra runners and that I would be fighting for a third or fourth finish. Reaching 50km every thing was still going to plan.

At 52km the wheels fell off. Cramp, the mean monster cramp that wiped me out in Comrades attacked again. For 26km’s more my race strategy flew out the window as I battled one cramp after the other, so frustrated and angry and losing a full hour of my time. The only thing keeping me going is that I beat them before and damn it, I will beat them again. Passing through the finish points in so much pain and still having to go again was truly horrid. At the 75km turn around I got the worst attack of all and had to let it “flow through”, painful as it was the cramps eased after this and became ‘manageable’, meaning I would run until I could just feel a cramp starting and would walk before the cramp really hit. This helped. Also from the 75km point doubled my intake of electrolyte and extra salt. I had so much fluid on board my tummy was swooshing, and I finally figured out to just keep rinsing my mouth and spitting the water out. It also took me 62km to change my fuelling strategy as I realised using the aid stations was not working for me. I belted up my hydration belt, carrying my own supplies and leaving a bottle at each aid station for them to full with ice, on my return swopping my warm water bottle for the ice filled one.

By this point I knew my goal time was well out the window, but I still had the chance of third place. If it was hot for me, then it was hot for every one, so if I could just keep the gap between us ladies, that would be sufficient. I had a few moments of puzzle when suddenly a 100km bib lady would come past and throw my count out, till much later when I realised these must have been late downgrades to the 50kms. The winning lady gained a full hour and a half on me in that second half. Incredible effort.

The Other Side of the Ultra. Recovery.
Mixed emotions. Super uber happy with achieving my goal of third place woman. Very frustrated and disappointed with my time. Physically I am gob smacked at how well I have pulled up, would never believe I had run that distance. Tired? Very. Two days later and I am still very very sleepy, and so not motivated for anything. The night after the run was very uncomfortable as my tummy ached the whole night. I was starving but could not eat anything. Feet are 100%. Happy I have done a 100km ultra? You bet!! 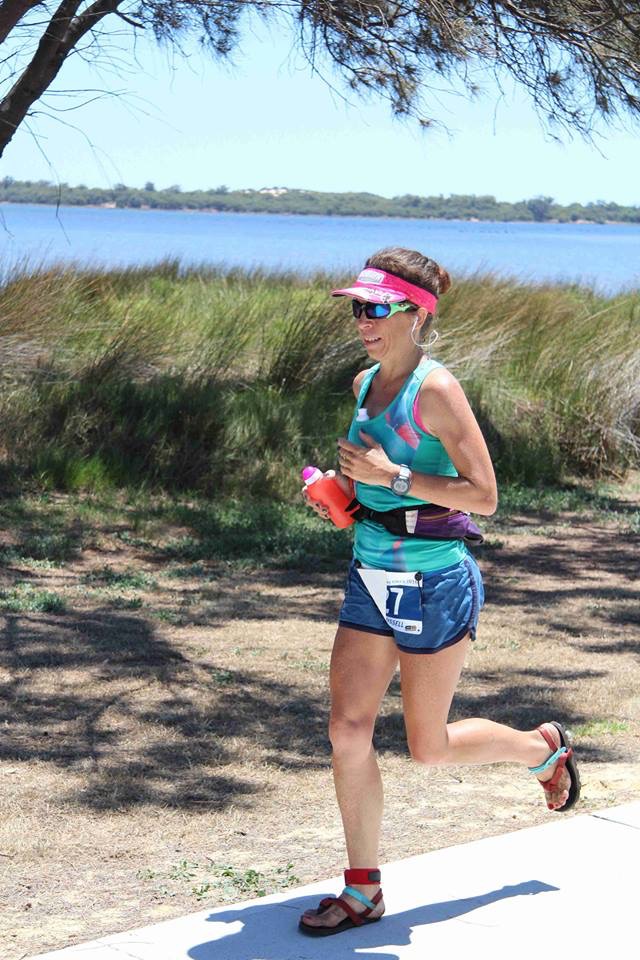 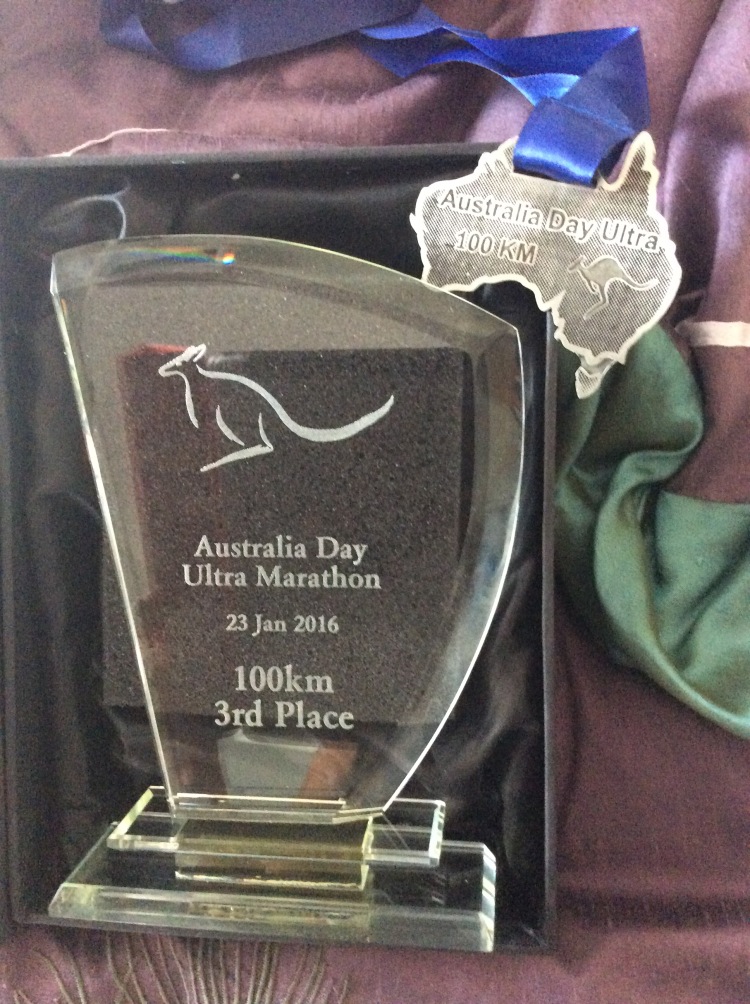 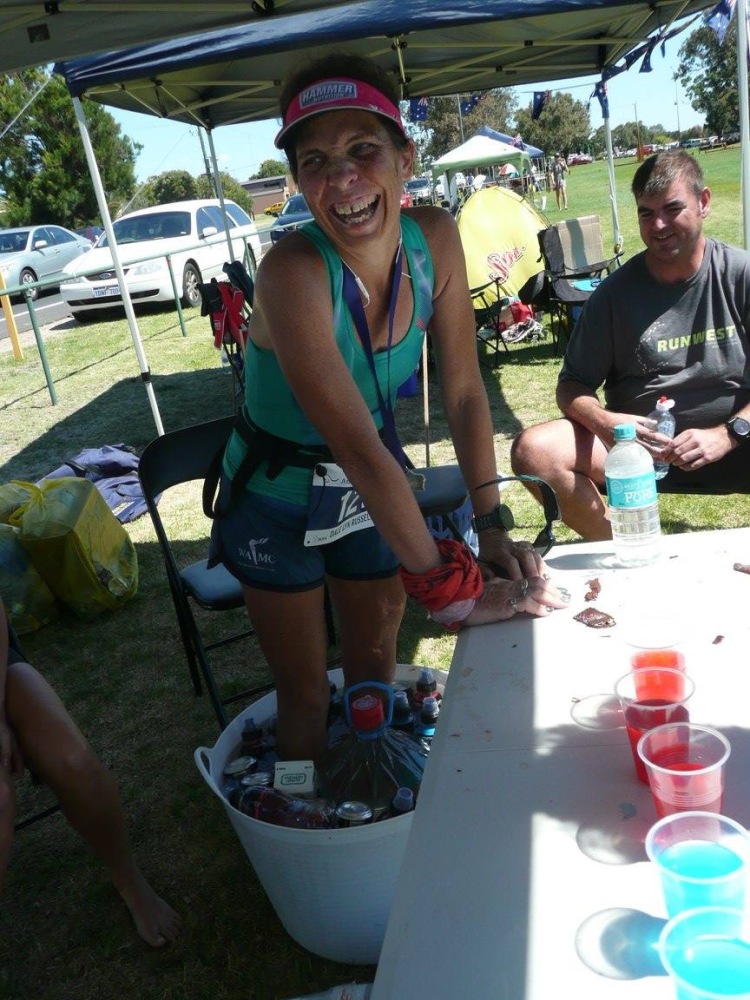 Hi, I am in my mid forties and run barefoot. Mostly really barefoot, sans any form of foot protection. My claim to fame for this blog, is that I have run my first full marathon completely and really barefoot, in a respectable time of 4:16. Scroll through my posts and enjoy them - all with a good sense of humour too. My story is simply my story of running barefoot, brought about by all the various questions people ask me. I am not a specialist of any sort or any particular athlete or doctor or guru. I am an average woman who runs barefoot, enters a few club runs and a few fun runs. I run races from 5km to marathon. I love trail running, and include chats about my trail adventures. To date, although I only started running end of August 2013, I have done nearly 2000km, of that at least 1500km in barefeet. Real barefoot. No minimalist shoes. Although when I do run in shoes I use my zero drop mimimus ones (haha - they are my ONLY pair of running shoes..) The blog tells of my journey through life, on the road, barefoot. The journey my real barefeet go through when they connect with the road. The emotions my real barefeet bring out - in me, in passers by, in fellow runners. The aggressive reactions and debates as to the well being of the real bare-feet I run in. The passive acceptance of my real bare-feet and their exposure to the elements. The humour to show those real bare-feet of mine are not just a piece of running equipment, a statement, a leftie or a rightie, but real flesh and blood feet with real issues. An interesting post note..I commenced my first active run in August 2013 progressing sporadically. But it really was only from May 2014 that I started running on a consistent and slightly more serious note and slightly faster than walking pace. I am scheduled to run my Comrades Marathon in May 2015..that is a massive progression from walk/shuffle er um excuse me look at me run.. to aiming to run a World famous Ultra. Some one pinch me please!
View all posts by Dale-Lyn »
« Barefoot running naturally
HBF 3 Waters Running Festival – the 50Km Option »