Since Comrades I have enjoyed a leisurely June. Wanting to treat my bod with a bit of respect and Love. Feral Pig Ultra on 2nd July was scheduled at a good time for a kick back into training. In June I bought a road bike and have been teaching myself to become a cyclist on the big bad roads and cycling to work. I joined the swim part of my gym membership and have been tackling laps in the pool.

Two weeks ago I did a 31km recon run of the first lap of Feral Pig. On this run I had a couple of falls, one at the top of the “Whore No More” (WNM) segment and then about half way down the sharp hairpin downhill switchbacks, I face planted and skid for about ten meters smashing my hip into some rocks or tree roots. I only got lost in the last 2km. No panic, there were vineyards on one side and houses in the distance. I made my way to some power lines and popped up on the road. Then remembered I have a phone in my back pack! Google maps came in useful. Not sure if I should own up that I never thought of actually phoning anyone.

A week later I got knocked off my road Bike by a kombie driver, where I hurt the other hip and badley bruised my left quads. I did not go to a doctor as I just sucked it up. It turns out this is literally the reason my run was all downhill as the belief by the specialist is that I had pinched a nerve then and of course knocked my body out of kilter.

The morning duly arrived, wrapped up for arctic conditions I picked Roy up en route and we arrived super duper early in Pickering Brook. To say it was cold is putting mildly.

The hum at the start line, chatting and catching up with all the other feral trail runners set the tone. My feet were freezing in the sandals and I just hoped they did not get too numb. Shaun’s race brief was hilarious, and still giggling about it we were told it’s a go.

I really was totally relaxed about this. I had no race goal, no time goal, no position goal. Heck no goal at all other than to run and enjoy the company, the scenery and comradie of the day. I figured I would come in some where within 6 hours at the max.

Starting off I was chatting with the inspiring Ingrid (who eventually placed 2nd). Ingrid pulled off from me after about 7 or 8km’s. Soon I was running along with Pam (who was to place 3rd). We kept each other company for a few km’s, and as Pam just started picking up pace about the 12km mark, I suddenly found myself face first in the dirt and feeling rather stunned. Sitting up I saw Pam disappearing along the trail. I was sore to move, my back in agony and felt extremely winded whilst my brain was still trying to work out what the heck happened. Getting up eventually I found once moving I would live. I hobbled for a while until everything warmed up again and I could get moving. Then down I went again, and I fell into a rolling stumble, a trick I pulled at least three more times, each time my back feeling the crunch more and more, with pain shooting down my leg.

Getting to the top of WNM something seemed wrong. A 25km runner had started following me, and I called out realising that we were not where we should be on course. Back tracking and hunting down the flags, we popped out at some intersection and came across another 25km runner who was also lost, she came in from another t- section. The three of us did some exploring until I finally recognised a stretch of the WNM from the recon. About 200m in, I found a bundle of tape on the floor, clearly it was the missing marker tape from the top of WNM. This little excursion added a fair amount of mileage. Coming out of WNM up the rather decent incline, crossing the road for the first lap, cheers through the start line and off for the second lap. I was on my own through this section and became rather confused. In the morning I been too busy chatting to pay attention to where I was running, and on the second lap I seemed to be running on too much tar road. I slowed to a walk hoping some one from behind would catch up. Random gun shots I had heard earlier on were firing off at a regular set and I realised there must be a pistol club somewhere. The gunshots really spooked me and I set off at a trot again. I eventually arrived at some t junction which I did not recall, and it dawned on me I was once again lost. Turning around I started heading back to the start gantry, and finally caught a movement of pink in the corner of my eye, and spotted the turn off I needed. Phew! My back and leg were aching beyond reason, so I decided to walk through the next section.

Just as I picked up pace again, along came Pam. It appears she too had done an additional detour at the top of WNM, and I must have got ahead of her in our wonderings. We kept each other company for a few more km’s and then Pam pulled forward. I had no drive or inclination to keep the pace. A couple more solos km’s and I got lapped by the 50miler trio of Ben, Nathan and Dave. By now I thought I must be the last 50km runner, as I had not seen any other runner aside from Ingrid and Pam, and on the second round Pam had Ben from SSR with her. I had been going so slow and walking a lot to help the pain in my back and leg.

Dave opted to stay with me as much as he could for the second lap. Dave was brilliant, we chatted the time away. My motto being walk the hills and run the flats and downs. Chatting away at one point Dave pointed out I was running up a hill. Needless to say I dropped to a walk immediately.
I had another bad stumble shortly before WNM again!!!! Up and running we chased the “whores” down the switchback, opening out our stride and just enjoying the free flow downhill. In the final 3km uphill drag to the finish line, I crashed to the ground again, biting hard into the dirt, jarring my back again, smashing knees and shoulders and head. I was so winded I did not think I could carry on. After encouragement from Dave, I got back on my feet and brought the race to the end. Coming down the last section, I tried straightening out for the finish (I had been running bent over for several km’s already), Dave bringing me across the finish line. To my amazement I placed 4th lady in and 8th 50km rank. A time of 5h 26mins.  I truely had believed I was last. I stayed the rest of the day seeing other runners coming in and and having an awesome dinner with the feral runners that night. Roy drove us home. Thank goodness for pain killers.

In the preceding days I have spent time at a variety of chiro’s, physios and sports specialists, as I have slipped a disc in my back, compressed some of my spine vertebrae and pinched my sciatica and other nerves. The swelling in my back is agony. I also had to have my shoulder manipulated back into place. However with the correct rest and treatment, they should be able to get me running again, I am told it will be later rather than sooner, so I think I will be doing more riding and pool running in the interim. While I wait to be given the go ahead to even try that, I am feeding my disappointment with a mass of baking and chocolate eating. 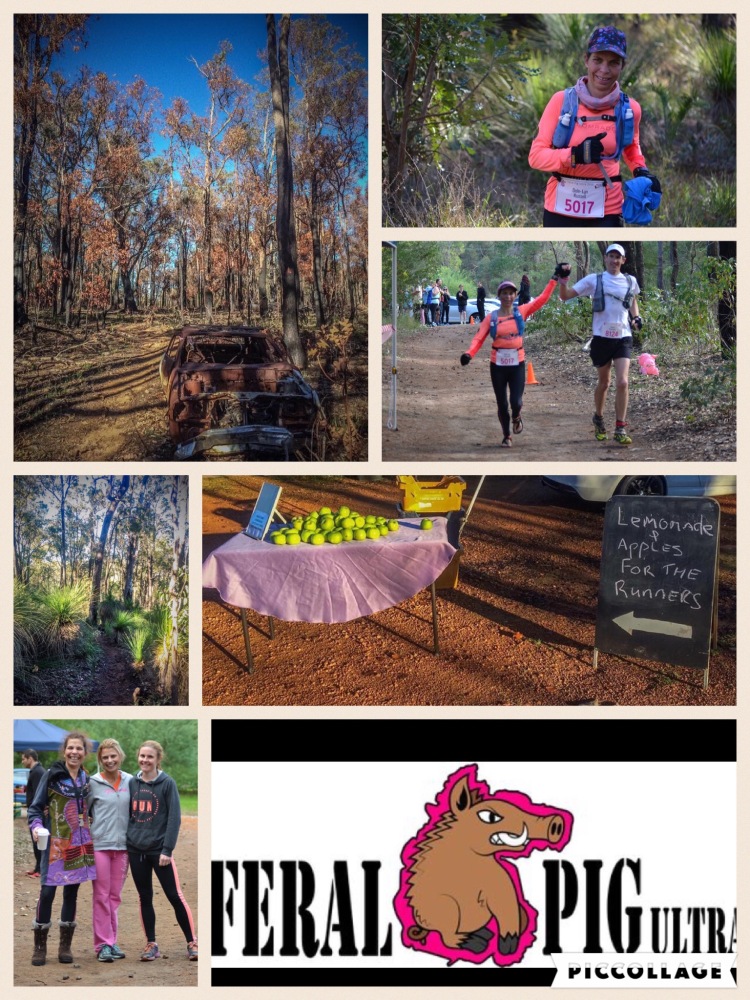 Please note that some photos in this collage are from photographers, runners and bystanders on the day, namely Jon Storey, Jo Malcolm and Jeff Anderson.  Thank you for them.

Hi, I am in my mid forties and run barefoot. Mostly really barefoot, sans any form of foot protection. My claim to fame for this blog, is that I have run my first full marathon completely and really barefoot, in a respectable time of 4:16. Scroll through my posts and enjoy them - all with a good sense of humour too. My story is simply my story of running barefoot, brought about by all the various questions people ask me. I am not a specialist of any sort or any particular athlete or doctor or guru. I am an average woman who runs barefoot, enters a few club runs and a few fun runs. I run races from 5km to marathon. I love trail running, and include chats about my trail adventures. To date, although I only started running end of August 2013, I have done nearly 2000km, of that at least 1500km in barefeet. Real barefoot. No minimalist shoes. Although when I do run in shoes I use my zero drop mimimus ones (haha - they are my ONLY pair of running shoes..) The blog tells of my journey through life, on the road, barefoot. The journey my real barefeet go through when they connect with the road. The emotions my real barefeet bring out - in me, in passers by, in fellow runners. The aggressive reactions and debates as to the well being of the real bare-feet I run in. The passive acceptance of my real bare-feet and their exposure to the elements. The humour to show those real bare-feet of mine are not just a piece of running equipment, a statement, a leftie or a rightie, but real flesh and blood feet with real issues. An interesting post note..I commenced my first active run in August 2013 progressing sporadically. But it really was only from May 2014 that I started running on a consistent and slightly more serious note and slightly faster than walking pace. I am scheduled to run my Comrades Marathon in May 2015..that is a massive progression from walk/shuffle er um excuse me look at me run.. to aiming to run a World famous Ultra. Some one pinch me please!
View all posts by Dale-Lyn »
« Comrades Marathon 2016